MIAMI — It’s easy to look ahead to training camp at this stage of the Miami Dolphins‘ offseason program. Their offense is in the process of installing a new system, and neither side of the ball has worn shoulder pads during organized team activities or mandatory minicamp.

But that hasn’t mattered to players in the trenches — especially a front seven that seems determined to maintain its status as one of the NFL’s best. Players say the level of competition without pads has been intense, and they expect it to remain so once everyone is in full gear next month.

“That’s what I can tell about this team, I think it’s a little different right now,” offensive lineman Robert Hunt said. “The guys are working without pads on and you can tell, guys are definitely fitting their gaps right, guys are coming off the ball, flying off the ball.” 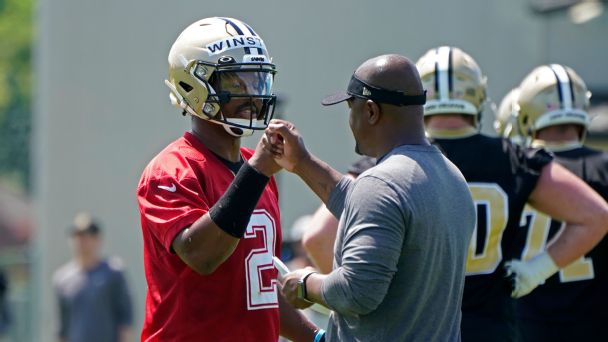 The Dolphins hired head coach Mike McDaniel and added seven players expected to play significant roles on offense in hopes of reviving a unit that ranked 25th in the NFL last season. However, defense remains the team’s unquestioned strength. The unit led the league in defensive expected points added over the final nine weeks last season when Miami went 8-1, and the plan for the defense this offseason has been clear: run it back.

Ingram didn’t practice with the team as it wrapped mandatory minicamp this month but was present on the sideline. He joins a pass-rushing rotation that includes Ogbah, who has led the team with 9.0 sacks in each of the past two seasons, linebackers Andrew Van Ginkel and Jaelan Phillips — the No. 18 overall pick in the 2021 NFL draft who set a Dolphins rookie record with 8.5 sacks last season.

“He definitely has a chance to be special,” Ingram said of Phillips. “He comes to work every day and he puts that work in. I definitely admire that.”

What you need to know about the Miami Dolphins:

The team believed keeping the defense intact was paramount as McDaniel deals with so much turnover on offense in his first season, and the decision was welcomed by defensive players craving stability on the sideline.

“I’m definitely happy. Just me personally, I always had different coaches,” linebacker Jerome Baker said. “Different linebacker coaches, different coordinators, going back all of the way to college. For me, [stability is] a good thing. … you know what you expect. You have a little understanding before you walk into the building. Now it’s just time to build off that.”

Also returning to Miami’s front seven are defensive linemen Christian Wilkins (first-round pick in 2019), Zach Sieler and Raekwon Davis (second round, 2020), who combined to form one of the league’s most underrated interior defensive lines.

Davis’ impact is harder to quantify statistically, but at 6-foot-7, 330 pounds, he is an undeniable presence in the middle of Miami’s defensive line who occupies space and blockers. He said the unit’s chemistry has kept it from becoming complacent entering 2022.

Report: Huobi to Start Layoffs That Could ‘Exceed 30%’ — Founder May Sell Stake in Company – Bitcoin News
17 mins ago

Report: Huobi to Start Layoffs That Could ‘Exceed 30%’ — Founder May Sell Stake in Company – Bitcoin News